The De-Carb Diet: Oil and gas in the energy transition.

The path to New Energy

The transition to New Energy is just that, a gradual transition. It is not the flick of a switch, where traditional energy sources are turned off and New Energy takes over. New Energy technologies need to continue to develop to offer economies of scale to ensure clean energy sources are not just the domain of wealthy nations but are accessible to all. As this process plays out, there is an acknowledgement that traditional oil and gas resources need to continue to be developed, albeit with a strong consciousness around minimizing and mitigating excess emissions from extraction to use. Numerous research groups, corporates and think-tanks are now engaging in research around pathways to achieve Paris-aligned climate goals. In this note, we review the implications of these pathways for fossil fuel producers.

There are numerous Paris-aligned scenarios available from key bodies that provide climate analysis. They include the International Energy Agency (IEA), the Intergovernmental Panel on Climate Change (IPCC) and some larger energy producers such as Shell, BP and BHP. We have provided a selected summary of some of these in Exhibits 1 and 2 where we attempt to simplify the key energy, oil and gas demand outcomes in future periods based on 2010 levels.

What we see is most Paris-aligned scenarios call for reduction of hydrocarbon demand. However, our analysis shows that this doesn’t spell an end of new oil and gas projects and equity investment. But it does require just an even more rigorous approach to stock selection to ensure future viability.

In Exhibit 1, we show the IPCC’s views of the change in energy use from fossil fuels only. Also included is demand change estimate from the EIA’s net-zero by 2050 pathway and Shell’s Sky 1.5 Paris-aligned model (Exhibit 2).

As summarized in the tables above, of the scenarios modelled by the IPCC and the IEA which forecast a decline in oil consumption, the estimated total decline is between 7% and 87% by 2050 from 2010 levels. This equates to declines of c17-89% from pre-COVID levels (2019) of production. Notably, natural field decline (8% as estimated by the IEA assuming no new capital is invested) would result in a reduction in supply from existing oil fields of 92% by 2050 – a larger decline than even the most aggressive forecasts of decline in consumption. This confirms the need for ongoing investment in new projects to meet expected demand. This is also the case over the shorter timeframe to 2030, where the estimated natural field decline of 51% from 2010 (57% from pre-COVID levels) is far greater than the forecast declines in demand (-19 to -47% from pre-COVID levels which equates to the 3 to 37% declines from 2010 levels forecast by the IPCC P1 and P3 scenarios).

This is shown graphically in Exhibit 3, whereby output is modelled to decline from 2019 levels at the natural rate of decline of 8%. This exhibit highlights the gap between a “no new oil development” outlook and the climate models of demand. Ultimately the size of this apparent shortfall in supply will have a significant bearing on oil prices in the future. 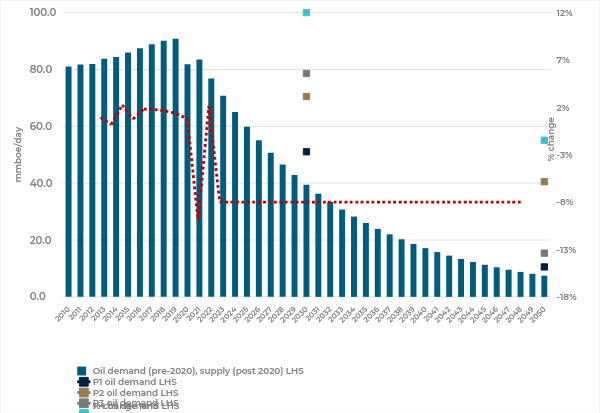 Source: Tyndall AM, BP Global Energy Outlook 2020, IPCC Special Report on Global Warming of 1.5°C [NB: 2021 decline is based on 2019 demand, given 2020 demand was severely impacted by COVID. We have also allowed for ~10mmbpd of oil for plastics & chemical feedstocks and grown this demand factor by 3% per year.]

Robust oil prices will be needed to incentivize future development, even in a world of net oil demand decline

While the scale of investment required is challenging to assess, it appears to be considerable. A starting point would be a simple comparison against the past two decades. Global upstream capital expenditure surged through this period (Exhibit 4), particularly after the GFC pause, but despite this massive investment, oil and gas production grew only ~2%pa on average (Exhibit 5). This was during a period where average natural decline was more in the order of 4%, as it wasn’t weighed down meaningfully by the contribution of a quicker-to-decline US shale industry. 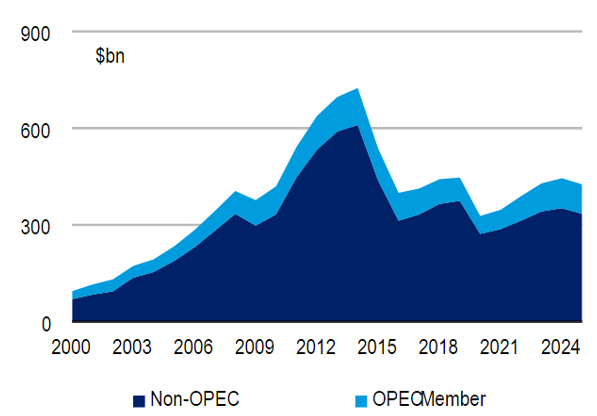 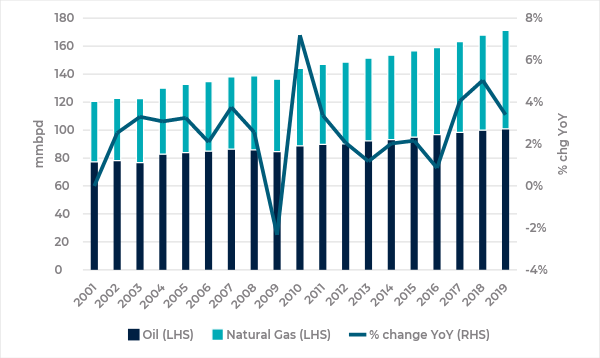 Very rough calculations suggest that over the last decade, the growth in demand coupled with natural field decline required the development of new production capacity (or enhanced recovery investment) of c50mmbl/day at a cost of cUS$5t. The three IPCC scenarios projecting a decline in oil demand forecast declines of 3% to 37% by 2030 (from 2010 levels). Combining this rate of demand decline with the higher natural field decline forecast by the IEA suggests a need for new production capacity of c20-55mmbbl/d over the next decade, at a cost of cUS$2-5.5t (before allowing for inflation).

Overall, this backdrop suggests that even under a number of Paris-aligned climate scenarios, oil prices will need to remain comparable to prices seen over the last decade in order to incentivize the new supply needed to combat natural decline.

This new supply will need to be “short cycle” in order to avoid the more significant impact from reduced oil demand beyond the end of this decade, and also to minimize the risk of an earlier than expected adoption of alternatives. Furthermore, any new oil development will need a low greenhouse gas (GHG) emissions profile to avoid the risk of becoming stranded under most potential carbon price outlooks.

Examples of short cycle oil projects owned by ASX-listed companies include Oil Search’s Pikka project, Woodside Petroleum’s Sangomar and Karoon’s Bauna. The Cooper Oil assets owned by Santos would also fall within this category and if coupled with the potential for Carbon Capture Utilisation and Storage, these could be extremely valuable in a more carbon constrained future.

Oil Search’s Pikka project is a stand-out in terms of new oil development GHG intensity, with an expectation of low emissions intensity relative to similar projects. This view is supported by Oil Search’s joint-venture partner Repsol, who highlights Pikka as a key enabler of its goal of becoming a Tier 1 low-carbon emissions producer. This positioning should minimize the impact of a potential global carbon price, assuming it can’t be mitigated or passed on in full. While we acknowledge Pikka will face challenges – being located on Alaska’s North Slope may see some potential financiers baulk at joining a lending syndicate – Pikka is located in State lands, shielding it somewhat from recent action taken on potential Alaskan projects located on Federal acreage. 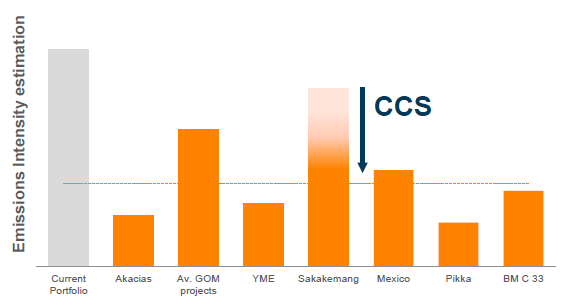 Natural gas has a similar profile within the IPCC’s pathways, though is far more prominent in the P3 middle-of-the-road scenario as a transitional fuel, with demand up 33% and 21% in 2030 and 2050 versus 2010, respectively. While liquefied natural gas (LNG) project economics will largely be set by the prevailing oil due to oil-price linked offtake contracts, we seek low cost developments such as Oil Search’s interest in the Papua LNG project, to ensure risks of becoming stranded are low.

One illustration of the merit of natural gas as a transition fuel, is the comparison of the emissions of a coal-fired power station to that of an LNG project and gas fired generation. An aging WA-based circa 850MW coal fired power station produces around 18PJ of energy annually, emitting 5.8Mt of Scope 1 and 2 emissions. That’s ~300kt of CO2 per PJ of energy per year, excluding the Scope 1 and 2 emissions of the coal mine supplying the fuel. Woodside’s Scarborough LNG project by comparison is estimated to generate ~180kt CO2 per PJ per year across Scope 1-3, some 40% lower than the coal fired power plant.

High efficiency, low emission (HELE) coal fired generation would likely close that gap, but gas fired generation technology is also improving its emissions profile and the role of gas as a transition fuel is clear.

Conclusion – the transition is inevitable, but the pace is less clear. Hydrocarbons still have a role

The transition to a carbon neutral world has already commenced and will accelerate. While the uncertainty around the precise trajectory of fossil fuel demand is impossible to determine, the scenarios presented by the likes of the IPCC and the IEA indicate that a heavy reliance on fossil fuels will remain for some time yet. Moreover, meeting the projected demand for fossil fuels will still require the development of new projects. But in assessing opportunities, investors must be mindful of the risk of stranded assets and that project economics must now also incorporate relative GHG emissions as an important variable.